The South Pole has been warming at three times the global average over the past 30 years, study says

(CNN)The South Pole has been warming at more than three times the global average over the past 30 years, a new study has found. That could have huge implications for the melting of Antarctic ice sheets, marine life in the region and the rising of global sea levels.

The study, published in the journal Nature Climate Change on Monday, sheds new light on the most remote region on Earth. While scientists have known for years that the outer regions of Antarctica is warming, they previously thought the South Pole, being located deep in its interior, was isolated from rising global temperatures.
“This highlights that global warming is global and it’s making its way to these remote places,” said Kyle Clem, postdoctoral research fellow in Climate Science at the University of Wellington, and lead author of the study.
Clem and his team analyzed weather station data at the South Pole, as well as climate models to examine the warming in the Antarctic interior. They found that between 1989 and 2018, the South Pole had warmed by about 1.8 degrees Celsius over the past 30 years at a rate of +0.6 °C per decade — three times the global average. 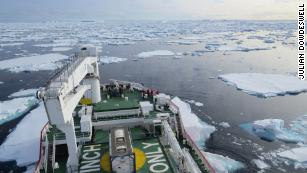 The scientists said the main cause of the warming was increasing sea surface temperatures thousands of miles away in the tropics. Over the past 30 years, warming in the western tropical Pacific Ocean — a region near the equator north of Australia and Papua New Guinea — meant there was an increase in warm air being carried to the South Pole.

“It is wild. It is the most remote place on the planet. The significance is how extreme temperatures swing and shift over the Antarctic interior, and the mechanisms that drive them are linked 10,000 kilometers (6,200 miles) north of the continent on the tropical Pacific,” Clem said.

Hotter temperatures have been recorded at other parts of Antarctica in recent years and the warming has serious global consequences, especially for the millions of people living on the world’s coasts who are vulnerable to sea level rise.
Antarctica’s ice sheet contains enough water to raise global sea levels by nearly 200 feet, according to the World Meteorological Organization.
In March, climate scientists recorded the first heat wave at a research base in East Antarctica and in February, the hottest temperature ever recorded in Antarctica –18.3 degrees Celsius (65 degrees Fahrenheit) — was measured at Argentina’s Esperanza research station.
Ice loss in the region has also been accelerating at an alarming rate over the past few decades. In the past 22 years, one giant glacier in East Antarctica has retreated almost three miles.
While the South Pole remains below freezing and is likely to stay that way, Clem said that the warming trend seen at the Pole is linked to what we’re seeing on the coast and the Antarctic Peninsula.
The warming “starts from the coast and works its way inland,” Clem said.
“As you move closer to the coast, where the warming is coming in, you’ll start to see more impacts. As you reach that point near the freezing point you start to get melting. Or you melt the sea ice and you start to warm the ocean in the Weddell Sea and that affects life in that area,” he said.

Is the climate crisis to blame?

Initially, the scientists found the South Pole was actually cooling by more than a degree during the 1970s and 1980s, while global temperatures were rising. The team said the cool period was down to natural climate patterns that occur in 20- to 30-year cycles.
Then the trend flipped rapidly “and all of a sudden we have nearly 2 degrees of warming at the turn of the century,” Clem said.
The jump from 1 degree of cooling to 2 degrees of warming signified a 3-degree rise.
Meanwhile, global temperatures have risen about 1 degree Celsius (1.8 degrees Fahrenheit) above pre-industrial levels and the aim is to keep global median temperatures to within 1.5 degrees Celsius (2.7 degrees Fahrenheit) to stave off the worst impacts of the climate crisis.
Clem said the extreme fluctuation at the South Pole suggests that natural variability was “masking” the effects from human-induced climate change.
The team found that the warming was caused by natural variations in sea surface temperatures over multiple decades. But these natural climate drivers “acted in tandem” with, or were reinforced by, global emissions of greenhouse gases.
“We have natural processes that are always going to be taking place amidst global warming and human’s influence on the climate system,” Clem said. “When the two work together it is quite remarkable.”

The science behind the warming

As well as human interference from greenhouse gas emissions, researchers said there were several natural processes working behind the scenes to warm the South Pole.
A climate phenomenon called the Interdecadal Pacific Oscillation (IPO), which governs ocean temperatures in the Pacific Ocean, flipped from a positive phase to a negative one at the turn of the 21st century. That warmed the western tropical Pacific, and caused more intense cyclones and storms.
At the same time, a wind system called the Southern Annular Mode (SAM) moved south, bringing that extra warmth from the tropics to Antarctica. The change in the SAM is down to the Antarctic ozone hole and increases in greenhouse gases, according to Clem. Experts aren’t sure what causes the change in the IPO, but haven’t ruled out human activity.
All that has made the South Pole one of the most rapidly warming places on the planet.

Because temperature records of the South Pole only go back to 1957, the scientists couldn’t draw a definite conclusion that the warming was driven by human activity.
So they used models that simulate the climate of the Earth with greenhouse gas concentrations representative of pre-industrial times — so without human influence.
In the simulations, the team calculated all possible 30-year trends that could occur at the South Pole in those models. They found that the observed 1.8 C of warming was higher than 99.9% of all possible 30-year trends that occur without human influence.
The authors said that while this meant the warming “lies within the upper bounds of the simulated range of natural variability” the nature of the trend was “remarkable.”
“Almost anywhere else on Earth, if you had 1.8C of warming over 30 years this would be off the charts.” Clem said.
But the result was not 100%. So there is a chance that warming at the South Pole could have occurred through natural processes only, according to Clem — but it’s a tiny one.
Previous Post

Annexation will not happen on July 1 – US sources